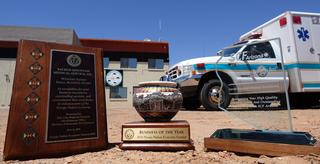 Danny Barney is from Lukachukai and is Bilagaana (White), born for Tó’aheedlíinii (Water Flows Together). Danny was a paramedic for 13 years before starting SMMS.

Sacred Mountain Medical Services, Inc. (SMMS) is an independently 100% Navajo owned and operated emergent and non-emergent ground ambulance company that has been operating on the Navajo Nation since 2002.   Registered with the Navajo Nation as a Priority 1 business,  Buy-Indian certified, have both SBA 8(a) (graduate) and Small Disadvantaged Business certifications and are qualified as a HUB Zone small business. And regulated emergent ground ambulance company that operates under a Certificate of Necessity (#127) for private land in Tuba City.

SMMS is regulated by the Arizona Department of Health Services, Bureau of Emergency Medical Services for compliance with A.R.S. § 36-2212.A and A.A.C. Title 9, Chapter 25, all personnel and vehicles meet requirements for ground ambulance emergency services which are inspected annually for compliance and continued operation.

Commitment
Karen and Danny Barney both grew up on the Navajo Indian reservation and have ties to these communities and feel that no other company has the desire to serve and care for the people like SMMS can.

Base Locations
Currently SMMS operates bases in Tuba City and Page NGS site. SMMS was founded in November 2002 in Tuba City and continues to service this community and hospital with Paramedic (ALS) level services. On average SMMS receives 1200 calls per year and half of those are 911 calls.

In 2007, SMMS expanded to Kayenta Health Clinic providing interfacility and 911 back up services with ALS units and BLS services, inter-facility transports accounted for 75% of the 1500 calls a year and the remaining were 911 responses.

In 2016 SMMS again expanded to Four Corner’s Regional Health Center with interfacility transport needs, because FCRHC could not admit patients or provide specialty services, patients were transferred out to nearby hospitals.

2016 Navajo Business of the Year

2011 Northern Arizona Best of the Best

2006 Western Navajo Business of the Year